Zero Suicide Alliance (ZSA) have marked 2019 by winning a hat-trick of awards for the promotion of their innovative and free online suicide prevention training.

They won the Not for Profit Campaign of the Year (in house) at the prestigious PRMoment Awards in Manchester, which follows their success in winning the Best Digital Marketing Campaign for the Third Sector at the Northern Digital Awards and the Best Use of Training category at the Engage Awards.

Joe Rafferty, Chief Executive of Mersey Care NHS Foundation Trust and one of the founder members of the ZSA, said: "Suicide remains one of the major problems in the UK with over 6,000 deaths a year and affects each and every one of us.

"It's great this training is being recognised now for the great information tool that it is. We have consulted clinical advice and spoken to those who have personal experience of suicide to provide real life scenarios and practical advice that will help those who take the course be better prepared to talk to someone in crisis."

Over 130,000 people have accessed the training, which has been developed alongside Relias UK, since it was first launched in November 2017. It take just 20 minutes to complete,  can be accessed by anyone and found on our website. 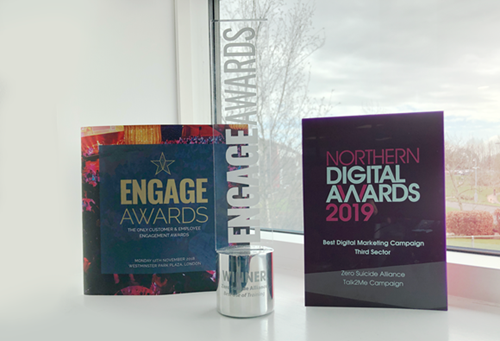 "This training is a brilliant example of the NHS working with a commercial partner, sharing knowledge and skills, in order to make this valuable training freely available to save lives," added Mr Rafferty.

The ZSA's success also attracted Government backing last year with Prime Minister Theresa May pledging to provide £2 million over the next two years to help their efforts to improve suicide prevention in the UK. The funding is designed to improve suicide awareness and training and the development of an innovative digital suicide prevention resources and exploration of cutting edge analytics to predict risk.

In the most recent Samaritans' 'Suicide Facts and Figures' report for 2017, they recorded 6,213 suicides in the UK and Republic of Ireland with men in the 45-54 age group the most at risk for taking their own lives.