A national suicide prevention organisation, leading politicians and those affected by mental health issues have joined forces to call on the UK’s broadcasters to redress the potentially lethal effect of stigmatising language in addressing mental health issues.

The Zero Suicide Alliance (ZSA), Steve Rotheram, the Metro Mayor of Liverpool, and local MP Luciana Berger, have sent an open letter today (21 January 2019) to all the major broadcasters in the country to reconsider the way they refer to mental health issues, which has recently been highlighted by Ava Max’s No 1 single, ‘Sweet but Psycho.’

Referring to Ava’s hit, the letter warns: “The track’s lyrics and associated promo video (which features scenes of irrational violence and threat that involve a baseball bat, darts and knives) casually underline negative perceptions of mental health – in short it’s a package that helps to encourage and support stigma.

“We understand this may not be intentional but even when it is not intended, perpetuating existing stereotypes has a disproportionately negative influence that reinforces stigma; and stigma is bad. It’s oppressive and alienating with life-threatening potential.

“Stigma encourages people to close down, preventing them from seeking help. Worse still, stigma can stop suicidal people from reaching out when they are at their lowest, most vulnerable point.” 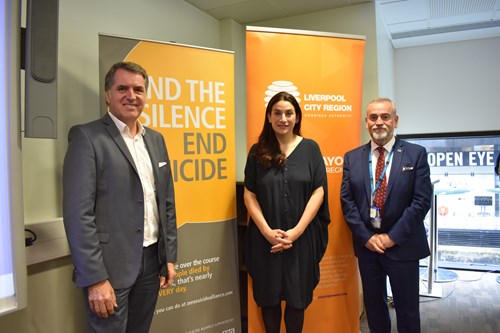 The letter, published on Blue Monday, traditionally the most depressing day of the year, calls on broadcasters to think about the language they use. They want them to encourage as many people as possible to access the ZSA’s free online suicide prevention training and be better placed to help save lives.

Luciana Berger MP, President of the Labour Campaign for Mental Health and adviser on mental health to Liverpool City Region Mayor Steve Rotheram said: “How we talk about mental health and the language we use is incredibly important.

“We have to stop stigmatising people with mental ill health, referring to them as “psycho” or any other of the derogatory terms that are still too often used. We wouldn’t do it about someone who has a serious physical health condition and it isn’t acceptable for mental health.

“Most importantly, by stigmatising those with mental health problems we are preventing them coming forward to access health services, which is crucial to their hopes of making a full recovery or successful management of symptoms.”

The Liverpool City region is aiming to establish the metro area as one of the leading lights in the battle against suicide in the UK and urged local businesses to take the ZSA training last year.

Metro Mayor Steve Rotheram said: “Liverpool City Region has a rich and captivating history – in fact, to this day, we are a UNESCO city of music. We therefore know better than most that creative work has the potential to have huge influence and impact.

“Chart topping music still has a significant reach and any negative associated connotations can cause a more malign influence. However, this debate has stimulated the opportunity to challenge negative stereotypes.”

“Mental illness affects a significant proportion of our population and affects us in varying degrees. Whilst our society is actively engaged in high profile campaigns like zero suicide initiatives, negative portrayals (even when it is unintended and when it is perceived as such) have the potential to cause more harm during this time of the year on Blue Monday.”